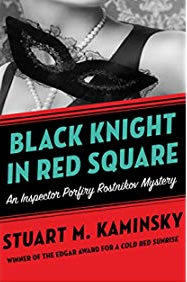 Black Knight In Red Square – I read the 2012 MysteriousPress.com kindle edition of this novel.

This is the second in the Inspector Rostnikov series. There has been a murder, a poisoning of an American, two soviets and a Japanese citizen at a hotel in Moscow. The American was a journalist reporting on the Moscow Film Festival. The other victims were also connected with the festival. Is this just an isolated incident? Could there be a nefarious person or group who seeks to spoil an important cultural event?

Chief Inspector Porfiry Rostnikov and his trusted assistants, the idealistic Sasha Tkach and dedicated Emil Karpo set off to investigate. From swank hotels, to meeting with prostitutes in dark Metro Stations, and following suspicious westerners to theaters and Moscow landmarks. Something is certainty going on..

Thanks to a brief meeting with the KGB’s Colonel Drozhkin, Porfiry is informed that there may be western capitalist fanatics loose within the city of Moscow. Now, not only does he have to solve the murder, but he is being tasked with preventing any terrorist plots against the Film Festival.

I’m real taken with the writing, the way Kaminski draws me into the whole story. And, there’s even a bit of the old noir detective fiction. Here Tkach is interviewing a suspect at her hotel room:

“I haven’t been much help, have I?” she said, rising slowly.

“You’ve told me what was necessary.”

“If you’d like to come back tonight after dinner and ask more questions,” she said, taking a step toward him, “I’ll be right here.”

Now Tkach smiled, and his smile stopped her. The game-playing halted, for she had seen something that told her things had not gone as she had guided them. That smile was quite knowing and much older than the face of the good-looking young detective.

“I have to work tonight,” he said, stepping past her. “But I may have more questions. And perhaps next time you will answer with the truth.”

Without looking at her he crossed the room, opened the door, and stepped into the hall, closing the door behind him. At this point, he had no idea whether or not she had told the truth. He’d had no reason to be suspicious until he gave her know what you are hiding. Tkach didn’t know that it was the smile of all detectives from Tokyo to Calcutta to San Francisco to Moscow. He had seen her play her scene out, then had given her the knowing smile, and for an instant she had broken, showing that there was something more behind those eyes and that lovely facade. He had no idea what she might be hiding or why. He would simply give the information to Rostnikov and let him worry about it.”