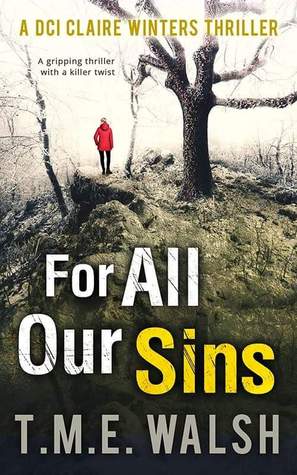 For All Our Sins – T.M.E. Walsh I’m on chapter nineteen of this train-wreck, almost one third through… and I just had to shelve it at this point.

I don’t know if the author intended this story to be ‘Young Adult’ fiction, but based on the childness of the main characters, and other dysfunctional relations within this police office, I just can not take it anymore.

This snippet below, an exchange between the team lead Detective Chief Inspector (DCI) Claire Winters and her subordinate Detective Sargent (DS) Michael Diego is a typical one for these two… its petty, vindictive, antagonistic, its like watching spoiled children… we are introduced to these characters in this state, and it isn’t getting any better. There appears to be no adult in this police station. Detective Inspector (DI) David Matthew outwardly gloats over having a current case reassigned from DS Diego like a child being given another child’s toy.

I’m one third into this soap opera and I feel I’ve given it a fair shot. It opens with a young woman killing a priest with her switchblade and that opening chapter closes out with a line of such promise “The dead cannot cry out for justice. It is a duty of the living to so so for them.” And I thought the chapter well done. But then… we meet DCI Claire Winters smack in the middle of some ‘mysterious’ undefined sub-plot and being called into work because of the homicide. Then we meet more of the cast and the characters come onstage antagonistic and unnaturally confrontational right from the start.

Then we get to interviewing a person of interest, and following up on their dysfunctional family life with runaway daughter and ‘mysterious’ foster children… there is the questioning of the daughter, and then thrown into this mix is an aside… a chapter with an inmate escaping from a local asylum for the criminally insane… and since that scene has none of the main characters in it… it stands as a well written chapter, much like the promising first chapter, but right after that, its back to the juvenile detectives.

So, being that there is so little time and so many more reading options, I’ve shelved this book in favor of starting the third DCI Erika Foster novel…

She called Michael to her office.

She stared at him as he sat in front of her desk, his hair messy and his face unshaven. He had dark circles under his normally clear eyes and his shirt didn’t look like it’d seen an iron in a long time.

‘Nice weekend?’ she asked. ‘Or should I say, eventful?’ She eyed him up and down. He shot her a sleepy look but ignored her question. ‘Judging by the look of you shirt, I’d say eventful.’

He stared down at his notepad, vacant expression on his face. Claire grew annoyed.

Leaning forward she clicked her fingers in front of his face. ‘Are you even fit to be in work, Diego? I’ve called a team briefing in twenty minutes and you’re looking fucked.’

She stared hard at him and felt the slight twinge of jealousy.

She remembered that look of his. It hadn’t been that long ago that she’d been on the receiving end of his wild nights out. It was obvious to her that this weekend he’d been showing someone else a good time, and she hated the thought of it.