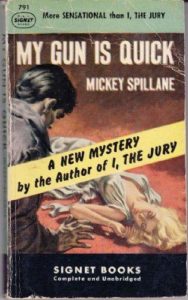 As the novel opens we find Mike stopping at a diner in the wee hours of the morning where he chats up a red head whose currently prostituting to make ends meet. He sees something honorable in the kid and invests some of the profit he’s just made on a case. He gives her some dough to get a new outfit, get a new job and a new lease on life. The next day she’s found dead, apparently by an accident but Mike sees it otherwise. He takes to the streets uncovering a city wide prostitution ring and dispensing cold hard justice along the way to finding her killer.

This novel tells a story whose central theme appears to be the potential for redemption in a gritty city pulled out from under you at the last second. Nancy, the redhead could have made it if crime hadn’t caught up with her. Lola, another central character who Mike encounters seems well on the way to redemption until her young life was snuffed out too. Even Ann who was going to take the cash a blow town, got herself whacked before she could cash the check.

Following up on leads, Mike encounters a wealthy elderly gentleman, the last survivor of his line, erecting a memorial to himself. While Mike explains what information he needs and the nature of the case, the gentleman is moved by Mike’s story feels a renewal of faith in human kindness… and insists on financing Mike mission to find the identity of the redhead, as its unknown to us at the start…

It’s here as the old man discusses the futility of wealthy the Mike offers his insight on what makes a detective.

What follows Mike all through the story, like a dog with the sent of a fox, snapping at his heels is this indignation. He isn’t concerned with the ‘big picture’ prostitution ring that his investigation appears to be unearthing. He leaves that to the press and the police to clean up. No, his mission is a personal vendetta… He took up a cause, to give a young deserving lady a chance at redemption and some one… some scum, stole that from her just as it was about to bear fruit.
It’s this feeling of ‘making it personal’ that builds an intimacy with this reader… I feel for these guys and dolls of the noir city.