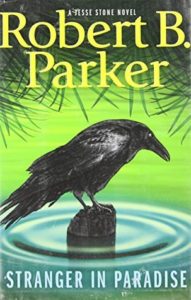 Stranger In Paradise – Putnam publishing February 2008, 304 pages, crime novel by Robert B. Parker, the seventh in his Jesse Stone series.

Gang-bangers, mobsters and gunmen oh my! Welcome to Paradise. Crow has arrived. The last time he was in Paradise was ten years ago and any crimes he may have committed back then have reached their statute of limitation. He’s back, and looking for a girl… a mobster’s daughter. Seems the dad wants his little girl back with him in Florida and has commissioned Crow to accomplish this task.

The daughter happens to be seeing something of a local gang leader. After an altercation or two in a rough little town just outside of Paradise where the gang calls home, Crow has his flighty juvenile. Having contacted his employer for instructions, the boss wants his ex-wife rubbed out. At this point we see Crow’s core values, and it seems murdering helpless, alcoholic ex-wives is not part of his warrior ethics.

By not acquiescing to the boss’s wishes a hit-team is dispatched from Florida with Crow as their target. The daughter is taken to Chief Stone who takes her in while Crow deals with the gunmen. As it would seem, killing armed gunmen is within his warrior ethics.

Eventually with a gang on the loose chasing him and the remaining gunmen hunting him, Crow agrees to hand over the girl to her father, but not without some late minute fireworks. A bend in the road by the sea with a nice wall and setting sun to shield them a handoff is proposed, to one group of trigger happy gunmen, the other group of trigger happy sociopaths don’t know about this arrangement… Will this hand off work, is it some sort of ploy, is Jessie going to watch as this goes down?

And what is it about Crow that reminds me of another bird man Parker has written so enigmatically?

“I wish to speak with my attorney,” he sad without inflection.
Jessie nodded. Everyone was quiet. The only sounds were the movement of the ocean, and the sound of the rain falling, under the low, gray sky.
There is no quiet like the one that follows gunfire.