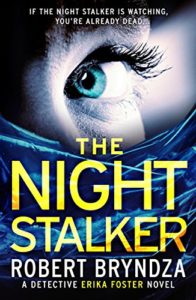 This is the second novel in the DCI Erika Foster series by Robert Bryndza. During a sweltering summer in London Erika’s homicide group is dispatched to the home of a well-to-do physician where his naked corpse lies strapped in bed with a plastic bag over his head. As Erika’s team begins to investigate, elements of the crime lead senior leadership of the precinct to wrap up what evidence her team has and turn the case over to a group specializing in sex crime. But Erika has suspicions that the case isn’t a crime of passion… that this murder is homicide.

Once again Erika has issues with the senior supervisor Marsh and the rest of the ‘chain of command’ as well… as she is written she is a “direct, driven and brilliant officer who didn’t suffer fools” and this story remains true to that. But she is also shown to be blunt, stubborn and won’t tolerate suck-ups.

In one exchange Marsh tells her not to pursue a person he knows had an alibi for the initial murder being investigated. But Erika keeps pushing him on that and tells him, “You know this kind of thing doesn’t work with me. Keep me in the dark and I’ll find a light switch”

And she also has an issue dealing with people in general. She puts forth her theory of solving crime “Often you have to piss people off to get to the truth,” and at the rate that Erika pisses off people in this novel, she should be up to her ass in truth.

As the heat wave draws on, the bodies stack up. From the initial physician, to a talk-show host, then an author of sadistic fiction… Erika continues to stubbornly pursue the Night Owl regardless of whose toes she’s trampling on.