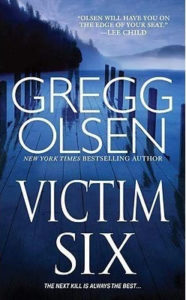 Victim Six – Published in 2010 and running 429 pages. A Mystery of the police procedural subgenre. A novel of a graphic violence graphically depicted. You’ve been warned!

Gregg Olsen is quite the writer. I will say the level of detail is impressive. He paints his characters with such clarity and dimension you get a feeling that he’s writing a true-crime novel based on real people he really knows. But this is a work of fiction and a wonderful story of a serial killer preying in and around the community of Port Orchard in Washington state. As a woman disappears, detectives Kendall Stark and her partner Josh Anderson begin investigating what will become a series of violent sexual serial killings.

Then there is the killer and his relationship with his wife, and how they fit in relation to the victims that make up this story. Then Olsen digs into the relation between the killer’s wife and their son. This will be a little nugget we’ll see develop in the epilogue, not to give anything away… and how the killer’s wife relates to her estranged sister. It would seem that all the characters he’s creating have numerous connection throughout the novel, except the killer himself. He, with the exception of his wife, isn’t really explored in as much detail… even as it come to his own son. But we do get quite the view of what’s going on inside of him… and that’s a view we as readers will not easily forget.

“You know the beginning and the ending, Serenity.”
“I think so. I guess so.”
“You want to know the middle, don’t you?”
Serenity nodded.
“Everybody does.”
“Tell me,” Serenity said, her eyes welling with tears. She Knew that the woman on the other side of the glass was no longer her sister. She was an imposter. A shape-shifter. A Thief of all her memories.