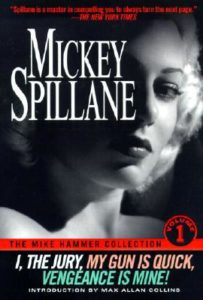 Vengeance Is Mine – I read this as the third story in the Mike Hammer Collection vol 1 – New American Library 2001. Original copywrite E P Dutton & Co. in 1950.

Felons, fillies and fisticuffs, nobody every accused Mickey of writing a dull story, and this third Mike Hammer novel starts out right away with Mike being roused from a night of drinking with a corpse in the middle of a hotel room shot with Mike’s own gun. Police are looking at it as a suicide, but Mike, having seen an important detail, comes to the conclusion that its murder… and if it wasn’t Mike, who did it?

Well, the corpse was an Air Force captain Mike had met when he came home from oversees. After a night or reconnecting over several bars, he turns up dead. Who in New York would want a department store buyer in from Cincinnati dead… that’s where Mike’s trail starts. And that trails leads to a modeling agency, a trip to the Bowery, a lunch in Greenwich Village, and a tangled web of an extortion ring weaving its way through the city leaving a string of bodies that were often dismissed as suicides. Somehow, the blackmailers are always one step ahead as Mike makes his way through to the truth behind the apparent suicide that wasn’t which started this crusade.

Mickey’s third novel, just like the first two makes wonderful use of straight forward prose to paint a picture of New York in the late forties on a canvass using a shadowy pallet of grays. Against this backdrop he paints the bright colorful characters of Connie, Clyde, Juno and Anton as well as the ever present and faithful Velda and Pat.

I love reading the pure, unvarnished, pre-pc prose. There is a raw and visceral quality to the low-life’s, high hats and criminal middle managers that Mike encounters. And although most people are quick to tell you about his hard-nose ‘take no prisoners’ approach to personal conflicts whenever some mook invades his ‘personal-space’ I like the wa that Mickey lets you know that the ghosts of Mike’s past still haunt him. Mike really sees clearly the impact that his actions make and that he himself is not insulated from the violence around him. But he still chooses to clean up his city. A city where Mike feels for his fellow citizens.

One description that really stands out in this book is where Mike is taken to a section of town he hasn’t visited in a while… and if you like this, wait till her goes to the village…

The Bowery, a street of people without faces. Pleading voices from the shadows and the shuffle of feet behind you. An occasional tug at your sleeve and more pleading that had professional despair in the tone. An occasional woman with clothes too tight giving you a long, steady stare that said she was available cheap. Saloon doors swung open so frequently they seemed like blinking lights. They were crowded too. The bars were lined with the leftovers of humanity keeping warm over a drink or nursing a steaming bowl of soup.

It had been a long time since I made the rounds down here. A cab swung into the curb and a guy in a tux with a redhead on his arm got out laughing. There was a scramble in his direction and the redhead handed out a mess of quarters then threw them all over the sidewalk to laugh all the louder when the dive came.

The guy thought it was funny too. He did the same thing with a fin, letting it blow out of his hand down the street. Connie said “See what I mean?”

I felt like kicking the bastard. “Yeah, I see.”