I enjoyed this pulp despite its disconnected voice. It’s the story of a young guy who joins the police department after coming home from serving in the Korean War.  His war bride wife, whom he married to spite the man who raised him before he shipped out, keeps pushing the young man to make more and more money.

Soon he’s taking a little grate here, a touch of a freebie there… but nothing serious… at least not until he lucks into making a collar that lands him a promotion, a modest bump in pay, but most importantly puts him in with an older detective… whose got a real money making side deal going. But this is still nickel and dime to what a huge payday may await them, if they can wait it out and play their cards right… why, it could be a million…

It’s a nice story well told in a first person point of view. And that I think is where it was a bit of an issue for me because where you can see in the story that this is a young guy not yet thirty… and there are several examples of where his immaturity can get the better of him… reading the narrative, the voice that’s speaking through it seems older somehow… I feel like the narrator is somewhere in his forties… I really can’t put my finger on why I get this impression. I suppose it’s just from the overall language being used… but the narrator of the story doesn’t sound like some twenty nine year old… kid…

I GUESS the first week I worked with Doc I learned more about police work – the right and the wrong kind – than I did in the entire previous year or so I’d been working at it. Doc was very good, as a cop and as a crooked cop. He was smart, had an explanation for everything. In fact, he could talk you to death about anything. He seemed to have solid connections behind him way up to City Hall. Most times we’d be assigned to the Commissioner’s roving squad, and whenever there was a shake-up in sight, we would be sent to some precinct detective squad, for a while. I guess Doc could have got us both some office jobs, but we worked hard, put in long hours on the streets – where there was money to be made. Right from the first day I made money. We never made a fortune, you understand (up till a few days ago, that is), but I managed to about double my salary. At first I was a little uneasy about the shakedowns, but as Doc told me, “Kid, you get what you pay for in this world. And a city only gets the police force it pays for. You weren’t getting an extra dime for working on your vacation, risking your life by going after Johnson. We take chances every minute. Then it’s up to us to increase our pay whenever we can.” 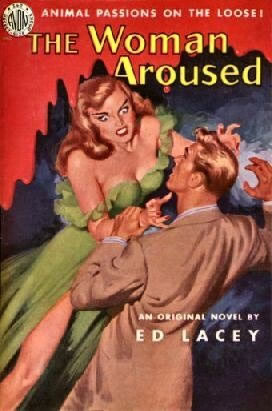 The Woman Aroused – Ed Lacey Published in 1951 I read the PlanetMonk Pulps Book 8 Kindle Edition. This is the first novel by Ed Lacy who, up to this point was mostly a short story writer, and this does read a lot like an extended short story. Although a death by mysterious circumstance does take place in this novel, I wouldn’t consider it a mystery… nothing about the death is really investigated, and questions about the death are not formally resolved. However, like the protagonist George, we do have a strong circumstantial case against one of the other characters.

And that is really what this story has going for it, characters. Characters up the Wahoo as we would say; distinctive, quirky and varied. Though not a mystery its more a slice of life story told in a tight first person narrative that has a short story feel to it. You can almost hear George sitting across from you telling you this account about his fall from grace and possible redemption by means of a young woman, the widow of a childhood friend from the neighborhood just returned from overseas Army duty.

And its this friend who has George hold some money for him so that his wife wont get it should they divorce as he anticipates. However, he falls out of the window of his fifth story apartment before he can divorce his wife. Now, George finds himself entangled with this wild foreign woman.

I really did enjoy this story particularly for the realistic sense of New York City in the post world war two late forties with the experiences of the veterans, those who served during the war, The character Eddie (whose political views seem very autobiographical to Mr. Lacy) who is George’s ex-brother-in-law, and the experiences of those who served in the time just after the war Walt, the son of George’s friend and co-worker Joe.

And then of course, there are those classic ‘pulp’ descriptions peppered throughout the book:

I went into the kitchen and I heard them kissing, then Joe told her,

“I’d best go in and help Georgie boy.” He came in and put a heavy arm around my shoulder, turned on the water in the sink so she couldn’t hear, said, “Jeez, what a night. I tied a big one on. Hey what do you think of Stella? Some sex-boat.”

“Not bad,” I said, pouring the beer. I knew all about Stella – all the Stellas: with a husband someplace in the background, maybe a kid or two, a busted marriage, a routine job during the week, and the frantic week-ends with any guy who treated her “nicely,” as she tried to regain her illusions of bright romance and youth over some bar; a dozen drinks fogging reality.