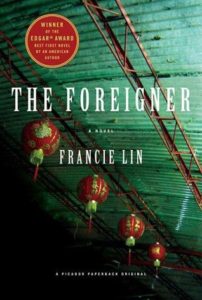 The Foreigner – Francie Lin hits a lot a major themes in this novel, love, family, honor, the past, the future, heaven and hell… but, is it a mystery? It’s a mystery in the sense that there are crimes and criminals and even a car chase down a highway in Taiwan. But as for mystery… I find it to be a mystery only in so far and there are things unknown, hidden things, but any story really takes time to unfold. You really don’t get the full picture of a character in a novel all up front… it rolls out over time.

As the story unfolds, Emerson, an eldest son who is close to his immigrant Chinese mother in America is thrust into a journey back to his mother’s home in Taiwan after her death of natural causes. There he must find his younger brother who’s cut ties with them years before in order to settle the estate.

Upon finding his brother ‘Little P’, Emerson is drawn into a murky criminal underworld whose dealings are centered around their uncle’s karaoke bar called the Palace.

A keeper of a shared past. That’s how Emerson views his younger brother. Now that thier mother, his mother, has past away Little P is the only one left to validate his memories as he comes to see things.

Having recently lost a parent myself, this thought had a eureka moment for me as I now see my own younger siblings as sojourners traveling on towards the end of days. Siblings, they are the only ones who really knew you when…

Emerson finds Little P in business with Uncle, and two cousins named Poison and Big One. And while Emerson seeks to extricate his brother from the seedy noir world in which he is erythromycin much a Foreigner, he encounters two young women, Angel and Grace. With the help of a friend and compatriot of Uncle named Atticus Emerson hopes to learn some of the things about Little P’s life here in Taiwan that he brother chooses not to talk about.

Yes, it has occurred to me that there is more to the naming of these characters than meets the eye, and I wish I had a better recollection of To Kill A Mockingbird than I do because, although Emerson is about forty years old in this story, it’s really his coming of age story… he may just be the Scout in this journey of discovery.

And for a taste of that ‘noir’ style.. How’s this:

The stout matron at the door turned out to be the bouncer and cashier both, and as she took our money, she rattled off a little spiel that was meant to be sexy and suggestive (“You look for fun tonigh’, huh? Our girls lot of fun”) but lost something in the bored, dry transaction of money for sex, especially when she and Angel scuffled over the amount of change owed. Inside the bar flanked the sides of a short catwalk illuminated by blue lights, with a pole at either end, and every once in a while a girl in a bikini and plastic heels would clamber onstage and do an indifferent little dance. Mostly, though, the dancers sat around the inside of the bar munching sandwiches and drinking Cokes. The place was not very crowed, which gave it an intimate air of soiled hopes.