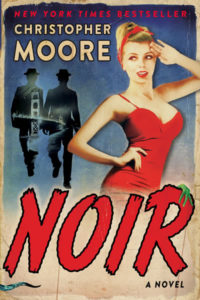 “A couple of onions short of a Gibson.” Funny… It’s the first book from this author that I’m reading.

Set in San Francisco in 1947, its Ramond Chandler meets J. A. Konrath with a humorous story of Sammy, a gimpy barman who falls for a blonde, Stilton (like the cheese) who’s built like a B-52 and wandered into the bar one dark and stormy night. Speaking of bombshells, we are introduced to a General who wants to perk up a weekend get-away in the woods with some working girls and Sammy’s shady boss Sal who has his fingers in many a shady pie, has just the idea…

Speaking of idea’s… Sammy get a helluva genius one when his Chinese friend and side-kick Eddie Moo Shoes take him for dinner at a place in the Chinatown back-alleys… If they could just get their hands on a snake and Sammy just knows a South African merchant marine from the bar who might just have the goods.

Things get a little out of hand with the snake crated up back at the bar… and now Sal needs to be put on ice. Next thing you know, the snake’s gone, Sal’s gone and the Cheese turns up missing!

Sammy recruits some friends, all neighborhood characters, and a search is underway… hijinks, including a high-speed car chase, ensue… Hold on to your aliens and G-men, its going to get bumpy!

She had the kind of legs that kept her butt from resting on her shoes – a size-eight dame in a size-six dress and every mug in the joint was rooting for the two sizes to make a break for it as they watched her wiggle in the door and shimmy onto a barstool with her back to the door. I raised an eyebrow at the South African merchant marine who’d been spinning out tales of his weird cargo at the other end of the bar while I polished a shot glass.