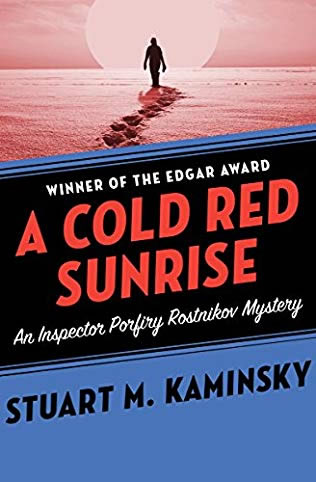 A Cold Red Sunrise by Stuart Kaminsky is the fifth Inspector Rostnikov novel. It was published in 1988 a time of turmoil in the Soviet but not reflected in the macro level of this story. No, this is a basic investigation of the murder of a minor Commissar who was conducting an investigation at the time of his murder. The fact that this assignment was pass to Colonel Snitkonoy’s MVD Unit makes Rostnikov suspicious. But, an assignment is an assignment and its off to the scene of the crime.

In this case, Portnoy Rostnikov and his trusty aide Emil Karpo are on their was to sunny but snowy Siberia. Joining them is an investigator with the Kiev office of the Procurator, He is to learn from the inspector good sound methodology of investigation. But who is really reporting to whom? Who watches the watchers? And in macro political jockeying amongst the myriad of Soviet Investigative services who will be gaining power?

Rostnikov’s deep brown eyes met the Wolfhound’s soberly and he nodded in agreement, though he agreed with almost nothing the handsome military figure in front of him had said. Rostnikov had been with the MVD for more than four months. He was certain that his and the Colonel’s views of the criminal mind were not at all similar, partly because Rostnikov did not believe in a criminal mind. There were evil people, true—stupid, selfish, brutish people—even a good number of quite insane people, but few who thought themselves so. Mostly there were people who considered themselves quite decent, quite compassionate, quite reasonable. They got carried away with their emotions, beliefs or assumed needs and broke the law, sometimes quite violently. The only minds that Rostnikov thought might reasonably be identified as criminal belonged to certain kinds of bureaucrats who had the opportunity and desire to engage in ongoing illegal activities.