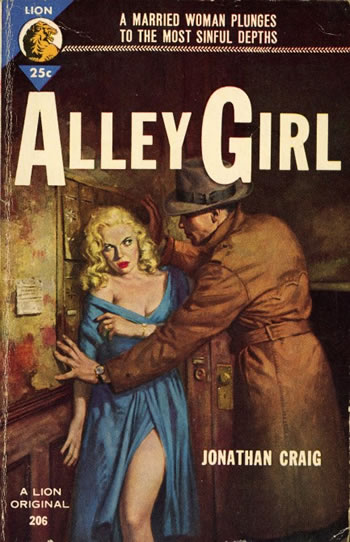 Ah, a cautionary tale of greed corruption and rank arrogance.  Lieutenant Steve Lambert, we hardly knew ye. This is a typical story of a bad cop running roughshod over the citizens around him. Seems a florist is killed, shot in his apartment, and a former alcoholic is passed out at the screen and taken into custody as a material witness and suspect.  Lieutenant Lambert and his partner Sargent Dave Kimberly catch the case with the only clue to go on is a witness who says he saw a woman flee the apartment after the shot and she ran down an alley. While Dave heads to the station to correct some reports, the lieutenant goes to talk to the suspect’s wife. The newly married Mrs Nolan turns out to be a young blonde bombshell with a body that get Steve’s libido revving. He extorts a roll in the back bedroom promising to spring her husband if she “cooperates”.

An element running through the story is the material witness clause which gives the detectives only 72 hours before they have to charge or release Mr Nolan. So it would seem the Steve’s fun with Mrs Nolan is going to be short-lived unless he can find a way to charge him. And then a man comes forward approaching lieutenant Lambert with an offer of compensation she he not pursue the figure that the witness spotted running into the alley. The lieutenant never met a bribe he didn’t like and five grand would be good, for starters… and he figures he could frame Mr Nolan and keep Mrs Nolan shelling out the “cooperation” for quite a bit longer.

With lieutenant Lambert busy with these to cross purposes, Sargent Kimberly is working the case straight, following up on witness statements reviewing the crime scene, taking notes… with the 72 hours counting down, can Sargent Kimberly find the person who fled down the alley, and how does she impact the fate of Mr Nolan…

The tale is your basic morality play and a decent working story. No bright shining metaphor gems like you would find reading Raymond Chandler or Mickey Spillane, but Steve proves to be a thorough bastard, Dave proves to be a good detective and the story throws you a nice curve ball there near the end.

He followed her through the dining room, watching the lithe swing of her rounded hips beneath the thin fabric of the housecoat. She paused at a half-opened door leading into a bedroom and turned to face him. Her lips were pale now and she spoke as if she had scarcely enough strength to articulate the words. “How do I know you aren’t lying?” she asked. “How do I know you won’t just … just … ”
He smiled at her. “You don’t,” he said. “It’s a gamble, like everything else in this world.” He let the smile grow wider. “But you’re going to be reasonable, Mrs. Nolan. You’ll damn well have to. You’re smart enough to know it’s the only hope Tommy’s got.”
She hesitated a moment more then turned slowly in the direction of the bed. “Let’s get it over with,” she said.