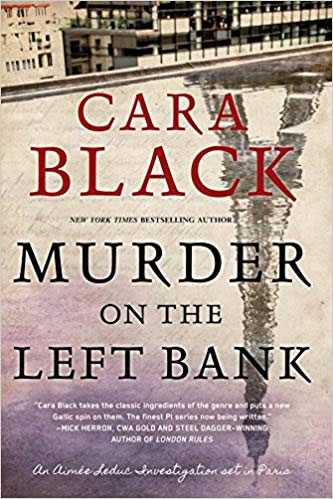 Murder On The Left Bank – Cara Black published by Soho Press 2018 – 276 pages… I checked this out of the library. It appears to be the eighteenth book in this Aimee Leduc Investigation series. A location mystery set in the city of lights, Paris.

How much detail is too much detail? It’s a personal question that can only be answered personally.  And since I am here to off my own opinionated review… I think this has too much detail. In just a couple of quick paragraphs (see quoted below) where a suspect, Danlin, is being tailed by our detective Aimee, our attention is drawn to four landmarks. Each gets its own quick tourist blurb. Now don’t get me wrong, I love location mysteries. But i like to really feel a part of the setting I like to take it in on a tactile level. .. the sights, the smells, the tastes, an immersion. .. but I feel that this book is more of a whirlwind group tour rather than a slower self-directed excursion.

There is an such an abundance of unconnected landmarks… this local flavor of detail is like a seasoning… meant to add a bit to the story, but here, it’s used almost to the point that of being the main ingredient!  Like, with you touch up a piece with a little glitter.. it serves as a highlight, but then you get these objects that are so encrusted with glitter you can hardly tell what the hell object is.

Well, as far as the plot goes, an attorney Bisson, whose a relation of a friend of Aimee’s seeks her help to locate a notebook that his nephew, who has been murdered, was suppose to deliver. It’s just another ball to juggle in the multitasking universe that is her life. Between working with her agency’s partner Rene on a proposal for a security system for the Bibliotheque Francois-Mitterrand Library and spending time with her bebe Chloé she agrees to look into the matter, low key.

As she starts probing around, she finds that a notorious shadow group called The Hand is also looking for this notebook behind. Where agents of the Hand responsible for the murder, or was it drug related as the police would have us believe?

It seems that this organization has been present in prior books in this series.

Aimee needs to track down a girlfriend of Bisson’s nephew to help she’d light on the notebooks hiding place. In tracking this girl down we accompany Aimee as she treks about Paris. Will she find this mysterious Katrine before the Hand can strike? Once you can weave your way around the landmarks littering your path, you have a real mystery to follow.

I think that I will try to read the first in this series and see if I can get the satisfaction I seek in it.

He followed the steep rue Renault in the direction of Maison-Blanch. Nearby lay the decrepit Panhard and Levassor car engine factory, commandeered by the Germans during the war to manufacture airplane engines for the luftwaffe.  On the other side, the cavernous la Petite Ceinture, the abandoned nineteenth century rail line that had once belted Paris.  Now overgrown, a deserted place where disoriented  cataphiles emerge from the catacombs to find themselves with junkies and foxes. Parts of the Left Bank were wilderness,  green where nature had rooted in the cracked stones. She loved the wild flowers sprouting on the tracks and the neighborhood groups that planted allotments of vegetables and kept rabbits.

Danlin woven through the small tress to Jardin du Moulin de la Pointe, a park where mills once harnessed the power of la Bievre. Here the Petit Ceinture tracks led into a tunnel. He got off his bike. She parked, grabbed her jacket, and picked her way down to the tracks in her ballet flats along the winding path lined by bushes and trees.