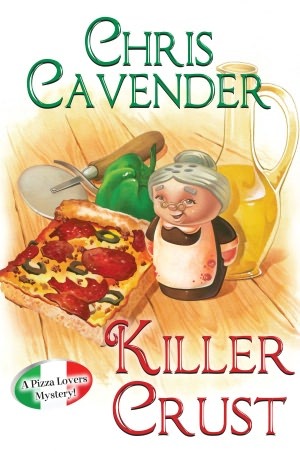 Killer Crust by Chris Cavendar is the fifth in a ‘pizza lovers’ cozy mystery series, published by Kensington Books in 2013.  It runs 228 pages, 231 if you include the pizza recipe there at the end. My librarian recommended this as part of their ‘cozy mystery’ awareness campaign. Not wanting to disappoint the enthusiastic book-pusher with the large round glasses and lush auburn curls, I signed up for the scheme. A cozy set in North Carolina about two pizza makes, well, for a New Yorker like me… ya gotta give it a try.

When Laughing Luigi, not his real name, a ready-made pizza crust entrepreneur and all-around #MeToo candidate is poisoned by a slice in a pizza pie palooza our Italian Nona’s, and southern belle sisters are asked to ‘snoop around’ to help solve the mystery. Like most cozies the story is populates with quirky locals, and in the case of this story, competitors from around the Carolinas all converging at a local resort hotel for a weekend pizza cook-off competition.

The mystery part of the story with its means, motive and opportunity, ran by quickly. Collect the clues, interrogate the suspects, make pizzas, nearly get killed by the perpetrator… that al went off well. But what I had a hard time with, was the two main protagonists, Elenore and her sister Maddie.  I really couldn’t get a good grasp of them… I can’t tell if they are supposed to be older women, like Italian Nonas, or maybe they are middle aged women running a pizza shop, by they read, or rather sound like young women. Fun, vivacious, spontaneous bon vi vants… it was a bit disorienting… so, personally in my head I make all the characters twenty-somethings because that how I ‘heard’ the characters… and visualized the unfolding story. And I only had a couple of urges to pick up the phone and call for a pie.

“What if I asked you to stay on here as a favor to me?” Kevin asked.

The chief of police took a deep breath, and then let it out slowly. “As much as it pains me to admit it, you and Maddy seem to have a knack for finding out thing behind the scenes that I can’t uncover in my official capacity. I’m not asking you to snoop but if you’re here anyway, you could always keep your eyes and ears open for things I might need to know.”

“Chief, are you asking me to spy on the other competitors for you?” I asked.

“I am. Do you have a problem with that?”