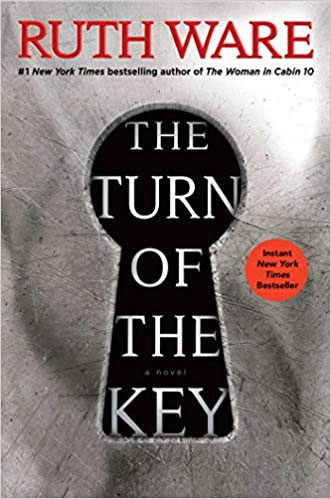 Turn Of The Key – Ruth Ware “Full of spellbinding nuance and told in Ruth Ware’s signature suspenseful style, The Turn of the Key is an unputdownable thriller from the Agatha Christie of our time.” Quoted from the dust jacket it’s a pretty claim to meet… Scout Press publishing 2019, 336 pages

It has a first person narrative… and the issues of reliability of the person telling you the story is put to question straight away when she tells you where she’s writing from. You see, the novel is not written in chapters, it’s written a a series of lengthy letters. So there really isn’t too many clear points of transition. Which is a bit off-putting as these narratives are a bit lengthy. The book puts itself out there as a ‘suspense’ novel. But as far as suspense goes… we’ll I’ve found the book to be easily put down, and come back to later. But one glaring contradiction in this is the pacing… it’s strange, as I read, the story folds out slowly (part of the reason for being so easily put down) but the timeframe of the story seems abnormally compressed. I’m two thirds of the way through this and she’s only been watching these kids for three days.

Also, there hangs over this story a broken promise. According the the promotion and the blurbs a undertone of surveillance is suppose to be woven into this tale, but I really didn’t see that come up. Although the house is connected to a network that the parents who are away on business can access, they don’t. The mom checks in remotely only twice, when the kids are getting ready for bed… a very normal thing to do… though she does this with her cellphone through the house’s speaker system… I see nothing  overtly ‘surveillance’ about that. Also the husband, Bill doesn’t appear to access the house system at all, when, if the accusation about him is true… he would probably be accessing the cameras.

The story is about a young woman who is looking for a change and finds an opportunity that is… wait for it… too good to be true. And of course it is. The young lady works watching children in a nurse at a daycare facility in London.  While surfing the Internet one day, she comes across a live-in nanny position in Scotland that offers free room and board with an annual salary of over fifty thousand pounds! So, she puts together a ‘mostly true’ resume (CV), and applies for the position. She is selected for an interview and the process goes quite well. She is selected for the position of watching three children, Maddie,  8 Elizabeth, and the infant Petra.

The house in Scotland is a melding of new design and technology,  apps the parents are accomplished architects, an old mansion that they had purchased and have been remodeling. So there is this whole old house with its haunting and the new house with its glitches.  Both of these conditions are gaslight ingredients our poor young nanny who is less ‘perfect’ than she puts herself out to be. And that works it’s way through the novel, the nanny who seems perfect, for a position that seems perfect, for a family that seems perfect, watching children who seem perfect in a house that seems, well, perfect… none of which is true.

The ghosts wouldn’t like it … I heard it again in Maddie’s reedy little voice and shook my head. Ghosts. How absurd. Just folktales and rumors, and a sad old man, living here after the death of his child.
It was more for want of anything else to do that I opened up my phone and typed in “Heatherbrea House, child’s death, poison garden.”
Most of the early results were irrelevant, but as I scrolled down and down, I came at last to a local-interest blog, written by some sort of amateur historian.