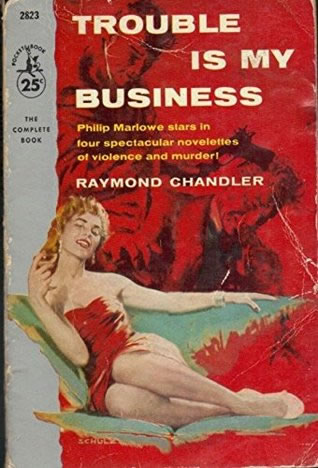 This is a collection of four Philip Marlow classic short stories ripped from the pages of Black Mask magazine.

In the first story… a case of extortion, blackmail, revenge and murder, Philip Marlow is subcontracted to rescue an infatuated young man from the clutches of a vicious vixen, after a prior detective on the case turns up deceased things take a turn for the sinister as nefarious types get the drop on our hero. Through bold fisticuffs and intrepid determination, Marlow makes it through to bagging the bag guys.

In the second one Philip Marlow due to testify against a corrupt political boss takes a bodyguard side job for a friend,  when  the friend gets bumped off on the way back from winning a bundle at a wheel rigged roulette wheel… Philip feels a frame… and the tomato playing the numbers at the wheel is telling too many stories to keep it straight.

The third story, Goldfish – Philip Marlow is on the trail of a pair of pearls in a pretty pricy caper… and a determined dame with a flair for violence, is no deterrent. Seems a pair of pearls earnings went missing from a robbery a couple of years ago. The insurance men will pay twenty five thousand for them and a former police woman turned boarding house madam has a clue to there whereabouts. .. twenty five thousand split two ways is a lot of dough. But the bird who gave her the tip have chipped to another, more ruthless chickadee who may just have a head start on Marlow.

The forth, a case of purloined pearls, Marlow falls into a case of cheating spouses and cheating chiselers. The hot Santa Ana winds feature through this story. Marlow steps into a new bar opening across the street from his apartment building. Only one other guy is sitting there, when a man walks in looking for a dame. A rather specific dame, and he describes what she’s wearing. Neither Marlow nor the bartender have seen her, and adds the man goes to leave, the other patron at the bar shoots him and flees, jumping into the guy’s car still running outside. And as fate would have it… the Dame as described just happens to be walking through the hallway in the apartment building across the street.

The door opened with a jerk and Finlayson and Sebold came in. Sebold looked as spruce and nasty as ever, but Finlayson looked older, more worn, mousier. He held a sheaf of papers in his hand. He sat down across the desk from me and gave me a hard bleak stare.
“Guys like you get in a lot of trouble,” Finlayson said sourly. Sebold sat down against the wall and tilted his hat over his eyes and yawned and looked at his new stainless-steel wrist watch.
“Trouble is my business,” I said. “How else would I make a nickel?”