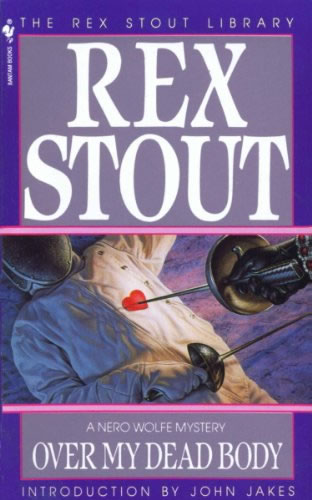 Over My Dead Body: A Nero Wolfe Mystery – Rex Stout I read the Kindle Edition. This is the seventh Nero Wolfe novel and was published in 1940. This book stands out in the Wolfe cannon as stating that Nero was born in America but this is not the case. In a subsequent interview Rex Stout says that Nero was not being completely forthright with the G man intruding in his personal affairs. This story is a classic mystery but with much fewer clues that the usual Rex Stout story imbedded within making this a relative difficult whodunnit… basically it comes down to guesswork after multiple suspects are interrogated and eliminated.

As it is, the plot begins as a young Montenegrin woman arrives at Wolfe’s office to plead for his help in a case involving a friend of hers, also Montenegrin, whose been accused of stealing diamonds. After a brief discussion, the young lady accused may be Wolfe’s adopted daughter. Archie is dispatched to look into the matter.

While looking into this at the fencing studio where both women are employed. Wolfe’s daughter has an apparent alibi corroborated by an English customer. As the situation is being resolved, the Englishman is found murdered in one of the training rooms of the studio. While the police are summoned to investigate this, Archie finds that the murder weapon is wrapped in a fencing glove and nestled in the pocket of his overcoat hanging in the office where all the customers and staff of the studio where congregated.

As this fencing glove and its item, may implicate Wolfe’s daughter, Archie returns to Wolfe’s with it while the police are investigating back at the Studio. At this point, Inspector Cramer arrives at Wolfe’s suspecting that with all the foreign intrigues and suspects, he came solve the case quicker by camping out at Wolfe’s. Wolfe, in a unusual manner agrees to let him stay and oversee the operations.

Most of the cast of suspects are brought before Nero at his office in what is to be his customary trademark. They are questioned vigorously with Cramer observing… after some time, deductions are made and Wolfe reveals the murder and the motive… in classic, customary style.

Ps. This is a really good episode in Nero Wolfe Mysteries from A&E Network!

“Have you registered?”
“No. I am not an agent of a foreign principal.”
The G-man threw one knee over the other. “The law applies to agents of foreign firms, individuals or organizations, as well as to foreign governments.”
“So I understand.”
“It also applies, here, both to aliens and to citizens. Are you a citizen of the United States?”
“I am. I was born in this country.”
“You were at one time an agent of the Austrian government?”
“Briefly, as a boy. Not here, abroad. I quit.”
“And joined the Montenegrin army?”
“Later, but still a boy. I then believed that all misguided or cruel people should be shot, and I shot some. I starved to death in 1916.”
The G-man looked startled. “I beg your pardon?”
“I said I starved to death. When the Austrians came and we fought machine guns with fingernails. Logically I was dead; a man can’t live on dry grass. Actually I went on breathing. When the United States entered the war and I walked six hundred miles to join the A. E. F., I ate again. When it ended I returned to the Balkans, shed another illusion, and came back to America.”
“Hvala Bogu,” I put in brightly.
Stahl, startled again, shot me a glance. “I beg your pardon? Are you a Montenegrin?”
“Nope. Pure Ohio. The ejaculation was involuntary.”

1 thought on “Over My Dead Body – Rex Stout”